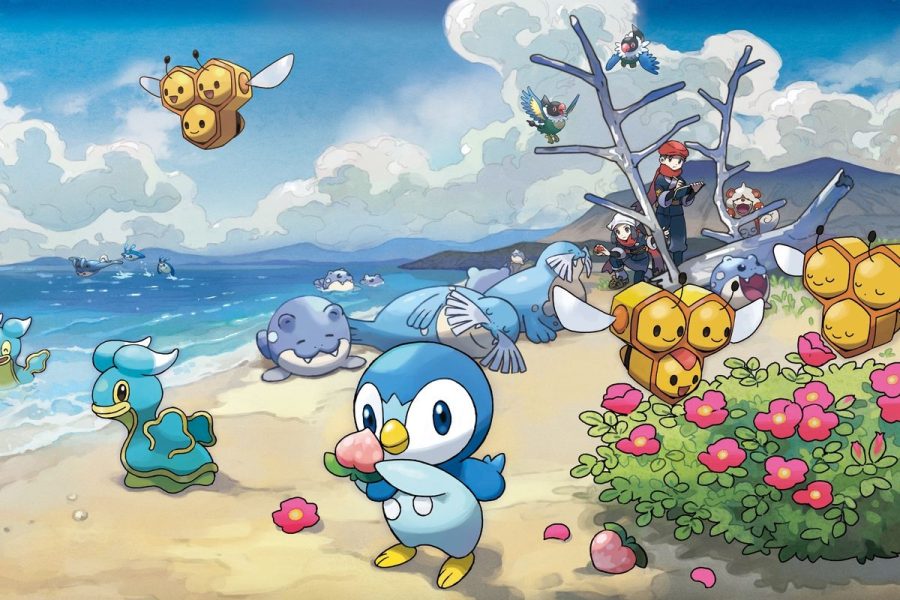 I have never been too interested in the “Pokémon” franchise. Whenever a game came along and if I had extra cash, I would buy it, play it, finish it, sometimes complete the pokedex, and then move on. It is extremely rare for me to replay a “Pokémon” game, because at least to me, they are extremely repetitive. You start off as a kid who “wants to be the very best”, so you battle your way through wild “Pokémon” and gyms to accomplish your goals. What first appears fun becomes repetitive after the first hour of playing. Mindlessly mashing an OP attack move to just demolish all opponents quickly becomes stale. However, a little over a year ago, the “Pokémon” Company announced a new game that takes the old repetitive formula and throws it in the shredder. Taking place long long ago in the “Pokémon” world, “Pokémon Legends: Arceus” stuck out to me.
“Pokémon Legends: Arceus” follows the protagonist (you) as you get flung back in time from current day to the Hisui region (the ancient Sinnoh region). There, you meet the professor of the game, Professor Lavington (hailing from the Galar region). After catching a couple of “Pokémon”, you and the professor head to the Galaxy Headquarters to what will most likely be the most boring part of the game. For what almost seems like a tradition, “Pokémon” games have some of the most boring tutorials and starting of any game ever. Almost one and a half hours into the game, you will find yourself mindlessly mashing the B button trying to skip the dialogue as fast as possible. But, finally, after what seems like forever, you are sent on your first expedition.
As soon as you embark, the game goes from a 5/10 to at least an 8/10. Focusing on the good aspects, I absolutely love how they incorporated real time “Pokémon” catching. Up until now, in order to catch a “Pokémon”, you needed to walk in tall grass, wait for a “Pokémon” to start a battle, damage the “Pokémon” enough so you can catch it, throw a pokéball, and then hope it works. Now, all you need to do is sneak up on a “Pokémon” and throw a ball. It is never a 100% chance the “Pokémon” will stay in the ball, but it is so so so so so so much faster. On the topic of catching “Pokémon”, the whole aim of the game is about trying to complete the first ever pokedex. This idea provides a really alluring plot point to make the player want to continue playing:. Bby catching “Pokémon” in unique ways, or seeing them use a specific move while battling, the player’s research level goes up. But besides just exploring and catching “Pokémon”, there is a half-decent storyline too.
Once you start exploring, you’ll see a “big “rip” of space and time at the top of the biggest mountain. That weird occurrence has made some “Pokémon” angry or even possessed. It is your job to quell them. The boss fights in this game are what really stuck out to me. A giant “Pokémon” tries to attack you, as you meticulously dodge and weave any and all attacks thrown at you. When you have a chance, counter the fierce “Pokémon” by throwing “balms” at it. Once the “Pokémon” is quelled and back to normal, you move on to the next zone to rinse and repeat.
I try my best to be in the camp of “gameplay over graphics”, but “Pokémon Legends: Arceus really pushes that belief. The textures look like they are straight out of a GameCube tech demo, lacking variety and even color at times. I interviewed Rory Morgan, a sophomore at CHS, to see his take.
“The visuals definitely need some work. I view “Pokémon” Legends: Arceus” as a step in the right direction. It still has tons of flaws and hiccups, but this is the biggest step the “Pokémon” franchise has made probably ever. Great ideas, not the best execution,” Morgan said.
After finishing the game, I felt like it was definitely the best “Pokémon” game I’ve played to this day. It combines a variety of fast paced mechanics that make the game far more enjoyable than the other games in its franchise. I would recommend this game to anyone that can spare the money to buy it