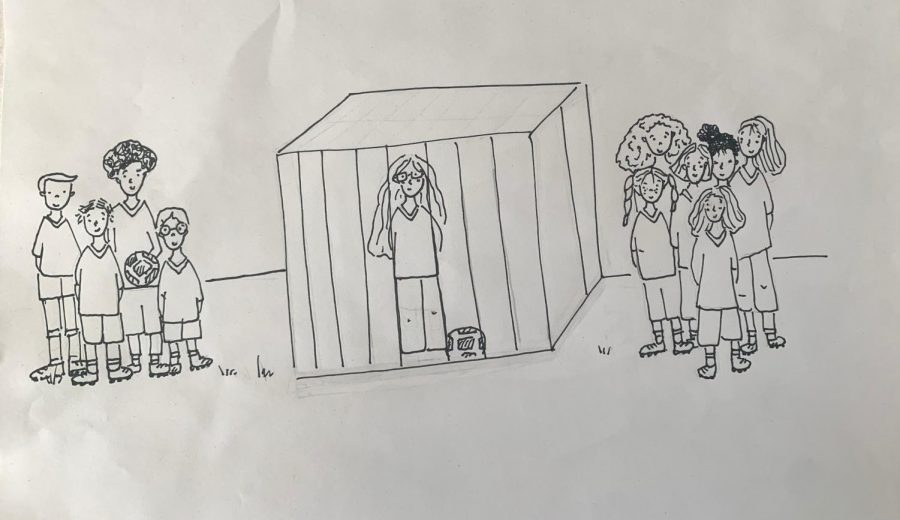 Transgender athletes’ rights are under attack as five states have implemented a bill banning transgender women from playing on women’s sports teams, and 34 more aim to follow. With this discriminatory action enacted into law, transgender athletes are prevented from competing on the sports team of their gender. Though conservative supporters claim these blatantly transphobic bills will “protect” the fairness of women’s sports competitions, it is transparent that the real goal is to further isolate an already marginalized community.

Many of the states working towards adopting the bill targeting transgender athletes use the slogan “Save Women’s Sports.” It appears to perfectly capture the ideals of the prospective bill in the sense that the slogan itself is transphobic. The threat they claim to be “saving” women’s sports from is other women, who share a mutual interest in competing in athletics. The bill devalues transgender athletes’ interest in pursuing athletics, and in doing so views transgender women as less than their cisgender counterparts, positing that they should not be granted the same experiences and opportunities. This legislation is a cruel reminder that though support for the community has grown throughout the years, transphobia still lingers, putting the mental health of many people at risk. Those in the LGBTQ+ community are far more vulnerable to mental health disorders such as anxiety or depression, mainly due to increased bullying, discrimination, and feelings of loneliness. In 2020 alone, more than half of transgender and nonbinary youth have reported seriously considering suicide. Banning transgender students from playing on sports teams of their gender has the potential to worsen the mental health of transgender youth, whether they are athletes or not, as it further targets and isolates the community as a whole because of their identities.

The politicians in support of the anti-transgender-athlete bills claim that they want to keep women’s athletics fair, in spite of the fact that they have never expressed concern towards the countless inequalities female athletes have faced for years. Instead of working towards eliminating genuine injustices, they use women’s sports as an excuse for spreading transphobia. Considering that less than one percent of the youth population identify as transgender, transgender athletes are a minority within both society and athletics. In Florida, where the state senate recently passed a bill banning transgender students from participating on sports teams that align with their gender identity, only 11 student athletes are transgender whereas over 300,000 are cisgender. The dedication Republican representatives in Florida and other states have towards such an unsubstantial issue only further proves the true intent of the corrupt bills.

Though the supporters of the “Save Women’s Sports” movement attempt to justify their stance as being based in equality and having no intentional harm on the transgender community, their language and recent actions fundamentally undermine this message. When defending the bill, Republican representatives constantly use transphobic rhetoric, often with the intent to invalidate the gender identity of transgender youth. In a letter to the South Dakota legislature declaring an executive order to ban transgender women from competing in K-12 and college athletics, Governor Noem wrote, “Only girls should play girls’ sports..” On her executive orders, it is stated that there will be a diminishment of “Current Policies that allow males to participate in women’s athletics…” This type of language serves no other purpose than to invalidate the identity of transgender women. Unfortunately, other government representatives have used similar transphobic messages when defending the bill. Beyond language, just in this past year, the states attempting to pass this bill have also implemented other anti-trans legislation. Twenty states have introduced bills limiting or banning gender-affirming health care for minors, and several have prohibited LGBTQ+ curriculum and have banned changing gender identity on ID cards. This other recent legislation further attests that the sports bill is not about equality and fairness, but repressing the rights of the transgender community.

Transgender athlete bans will not “save women’s sports” from the non-existent impending threat Republican representatives claim it will. It will also in no way “maintain equality and fairness”, and instead will isolate and invalidate the identities of transgender youth. For them, it was never about equality in women’s sports, but rather withholding the rights of the transgender community. However, supporters of these transphobic bills are well-aware of this. These bills must be repealed and replaced by ones that protect the transgender community from marginalization in the future.