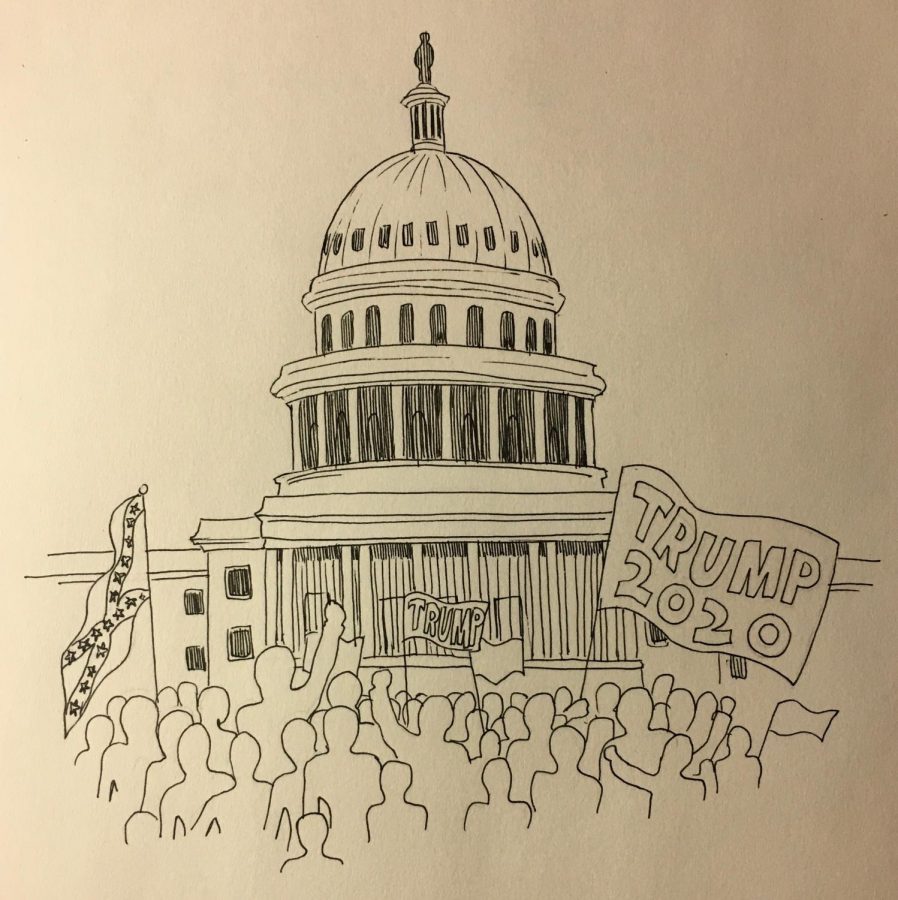 This article was written on January 14, 2021, so there may have been changes or updates between the writing and publishing of this article.

The United States is a symbol of democracy around the world, once thought to be unshakable. However, on Jan. 6, 2021, that notion was shattered as rioters stormed the U.S. Capitol building in an effort to halt the ratification of Joseph Biden’s electoral win over Donald Trump for president. Not 24 hours earlier, votes were being cast in the Georgia Senate race, the winner of which would control the Senate. And the madness of 2021 has not slowed. As of Jan. 13, 2021, Donald Trump became the first president in U.S. history to be served with articles of impeachment twice.

The Capitol insurrection, as it has been called, started as a march to the Capitol to protest the ratification of the electoral votes in the 2020 presidential election on the grounds that there was massive voter fraud and it was an illegitimate election. There was no evidence to support these claims. However, this political rally and protest went ahead urged on by President Trump. In his speech at the rally, the president repeatedly asserted that he had won the election by a landslide and now it was being taken away from him. He also encouraged the attendees to march on the capitol and within seconds after he finished, the crowd then forced their way into the capitol building. Both chambers of congress in the joint session were quickly moved to safety. None of the congresspeople or senators were injured but unfortunately, Ashli Babbitt, one of the rioters was shot and killed in the halls of Congress. It was also reported that 5 people died along with dozens of injuries.

“I think this needs to be a wake-up call for the U.S,” CHS Junior Anthony Rumbos-Prez said. “We shouldn’t and can’t think of ourselves as above the political and social chaos we see in other countries. This type of thing is normalized to us in places like Latin America where oftentimes we incite it but is crazy at home and we can’t think like that anymore. We need to continue to question our foreign policy and our government to make sure that they’re better and so this won’t happen again.”

Preparation was also an issue as there were almost no police officers stopping the rioters from getting in and the national guard was not called in for some time. Jan. 6, 2021, will go down as one of the darkest days in modern American history.

Ironically, the day that the democratic process was challenged the Georgia special elections’ results were announced. People had come out in droves the previous day to vote and make sure their voices mattered. In both Georgia Senate races, the verdict was too close to call during the regular election, so special elections were set on Jan. 5, 2021. Two Senate seats on their own might not have seemed like that big of a deal, but the stakes couldn’t be higher as the democrats had won 48 seats in the senate and republicans had 50. This meant that if the Democrats won both of the Georgia seats then they would take control of the senate, whereas if the Republicans won even a single race then they would retain control and could derail Joe Biden’s legislative agenda. All the campaigns worked until the very last day where Raphael Warnock beat his opponent Kelly Loeffler with 51 to 49 percent of the vote, turning one of the critical seats blue. Much later it was announced that by an even smaller margin, 50.6 to 49.4, Jon Ossoff triumphed over David Perdue turning the seat and control of the Senate over to the Democrats. With the control of the Senate, the Democrats now control both the Senate, House, and the White House. This means that the Democrats will have a serious advantage in pursuing and passing their agenda.

As of now, their agenda seems to be making sure Donald Trump is no longer president. On Jan. 13, 2021, the House of Representatives voted to impeach President Trump for a second time, which until now was unprecedented. The official charge is for inciting violence and the capital riot. The house delayed its process in the hopes that Vice President Mike Pence and cabinet officers would invoke the 25th amendment and claim President Trump was unfit for his office. However, these hopes were dashed when Pence made a statement saying that he would not be using the 25th and that all parties should exercise restraint. While the vice president did not think impeachment was necessary, many Americans firmly believed Trump needed to be held accountable.

“I think it’s a historic moment for sure, and definitely needed, you can’t just incite violence against your own capitol and get away unpunished,” CHS Sophomore Lorenzo Cano said.

And many people agree with Cano, including the house of representatives, Democrats, and Republicans alike. In the first impeachment, the votes were along party lines, however, the second had 10 republican representatives vote for it. However, it is unlikely that he will be convicted as Mitch McConnell the current Senate Majority Leader has said that he will most likely not call a vote until after the inauguration of Joe Biden at which point the vote will be mostly symbolic. Political chaos is just one of the challenges in 2021, as with the coronavirus pandemic still in full swing there is only more to come.