Can reading vanquish racism in America? The pen may not be mightier than the sword, but it sure is not weak 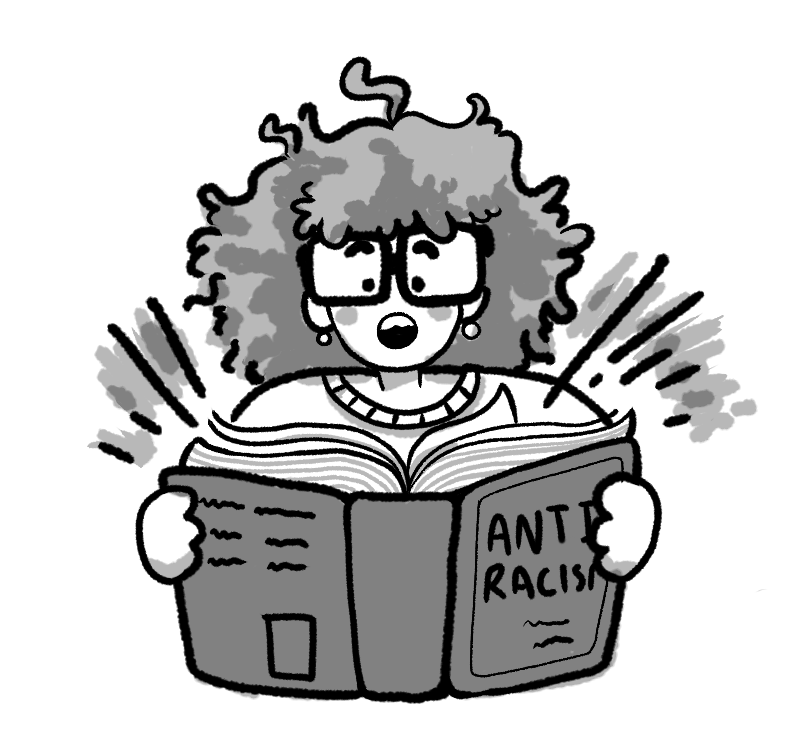 During the first months of the country’s collective reckoning with racism and proclamation of anti-racism, social media platforms such as Instagram were abuzz with posts instructing quarantined teens how and where to channel their newfound, or pre-existing, energies to most benefit the booming anti-racist movement. Found on countless Instagram stories, these posts pollinated young minds, drawing inspiration from here, influencing there, and finally supplying long-awaiting ideological, financial, and moral honeycombs with nectar. Some of these social media posts contained reading lists of books which explore anti-Black racism in America, written by seminal authors of color, while others condemned a perceived naïveté of the creators and distributors of such reading lists: “You can’t defeat racism with ‘reading lists.’ Take it from a feminist — we tried this,” asserts the title of an article published in The Guardian by Jessa Crispin, which, along with many Instagram posts, advocates for a prioritization of protest and direct action over the oft-idealized recourse of reading. The matter of literature’s place in the anti-racist movement is clearly complex. So, as a lifelong believer in the power of the pen, I wonder, what is the role of literature and art in achieving widespread equity among American in-groups, such as ethnic groups? Is the pen truly mightier than the sword, and what kind of power can it wield?

Aside from the clear, objective enlightenment nonfiction can bring about, it seems as though exposure to art lends unconventional “knowledge,” transforming an audience’s moral code, empathetic ability, and situational knowledge. However, many staples of the Californian system of public education fail to effectively address the issue of the American brand of hate, ignorance, and discrimination. Moreover, even when one reads all of the “right books,” watches all of the “right movies,” listens to all of the “right podcasts” … a society ripe with conscientious, ethical individuals might still fail to effectively implement long-standing, systemic change.

What can be called “ideal” nonfiction, or nonfiction with little aesthetic or rhetorical characteristics, can be assumed to impart fact-based knowledge to the reader. Being informed about the facts of an issue or situation, whether information is rooted in statistics or reporting, is an obvious way of swaying one’s opinion or action on a subject. For instance, although my mom and I have been vegetarians for my entire life, my dad made the transition from an omnivorous to a vegetarian diet in large part due to his reading the nonfiction book “Eating Animals” by Jonathan Safran Foer. In the same way, reading about redlining and other inequitable American practices could clearly sway one’s opinion towards more radical systemic change. However, even nonfiction pieces employ aesthetic and rhetorical devices, meaning that the reader’s response to nonfiction cannot be evaluated solely as the gain of factual knowledge.

Thus, the evaluation of responses to historical fiction, fact-based fiction, and general fictional literature can be given more weight than that of responses to “ideal” nonfiction. In examining literature and art’s effect on the reader, Cynthia Freeland’s journal article “Art and Moral Knowledge” is of paramount relevance and insight. In it, Freeland describes a spectrum of philosophical thought about the human response to art in relation to moral knowledge and the moral and aesthetic values of art. The most enlightening and convincing of the standpoints described, it seems, is the ‘cognitivist’ philosophy, which argues, as Freeland writes, most notably, that “artworks stimulate cognitive activity that may teach us about the world.” Cognitivism, generally, and all-too briefly, posits that the moral content and intrinsic form of art are linked, and that one can learn from the moral content of art. Freeland also explains that modern cognitivists argue that art elicits an emotional response in the audience. Within the realm of cognitivist thought, the two branches of pragmatism and Aristotelianism arise. Pragmatism and Aristotelianism assert that “(1) Artworks may have moral content or present moral knowledge, as revealed by a process of rational interpretation; (2) Artistic features and moral content of works of art are conceptually linked; and (3) We can learn from the moral content of artworks,” as Freeland writes. Nussbaum’s Aristotelianism is an avenue of thinking which falls under the greater theory of Aristotelianism, and Nussbaum asserts that a reader can gain practical wisdom (“a unique rational capacity of humans that depends upon particularity of perception rather than” on what many refer to as ‘book smarts’) and literary imagination (empathy) when presented with a web of complex literary characters and plotlines. Putnam’s pragmatism adds that art can convey knowledge about how to process the world. Also, Putnam philosophizes that art is the means of understanding a culture or a community. Yes, these fancy philosophical words describe what every reader knows to be true through a variety of observations and personal experiences: literature lends the reader empathy, social conscientiousness, an understanding of and willingness to listen to others’ perspectives, and lenses through which to view factual knowledge and the world. Thus, a society of readers is a society of ethical, compassionate, rational individuals with a moral ownership of societal issues which may not directly affect themselves.

To effectively combat racism in America, it would therefore be necessary to provide students with perspectives of Black and indigenous people of color (BIPOC), groups historically targeted by racism, imparting to students literary imagination and the ability to see society from the angle of the oppressed. Not only are these perspectives necessary, but the works chosen for a school’s curriculum must also be able to impart the right kinds of lenses and practical, conceptual wisdom to provide students with a balanced vista of the varied humanity of those oppressed and historically marginalized by racism. At Claremont High, students are neither provided with sufficient perspectives of BIPOC nor a balance of perspectives. By no means am I suggesting that a quota of perspectives of BIPOC should be established, only that teachers and curriculum-creators be more thoughtful in choosing a selection of works to study. With regards to the presence of perspectives of BIPOC in Claremont English classrooms, a belief widely held by students is that books written by BIPOC are only studied in advanced classes, which, for reasons too manifest and manifold to detail in this piece, is problematic. Turning to the types of perspectives of BIPOC offered by the school’s English curriculum, in the award-winning Wolfpacket opinions piece by Abby Bodell, Bodell writes of Claremont’s limited inclusion of authors of color, “Provided only with examples in which such individuals become victims to their surroundings, students have little to no opportunity to view them for their true humanity, resulting in a resounding impression of them for their supposed weaknesses.” Given bleak lenses with which to view victims of racism and other forms of oppression in society, students are not equipped with the tools to forge armor or weapons against societal oppression.

Reading a balanced array of perspectives of BIPOC authors can sway one’s opinion on systemic change and anti-racism, give one empathy and insight into the experiences of the oppressed, equip one with knowledge of what to do when presented with interpersonal dilemmas, and allow one to view the world with equitable, ethical lenses. Yet, would all of this individual reformation solve racism? It clearly would not in America, a land of systemic oppression. Still, reading could make America “the home of the brave,” those willing and able to enact systemic change and eager to strive for the creation of a “land of the free” and the destruction of this land of systemic oppression. In light of these conclusions, direct protest and advocacy is ultimately the best action to take to vanquish racism in America, yet a step towards increasing the strength and impact of those direct actions on society is through the exposure of the general public to anti-racist art and literature. More specifically, the strength of protest could be increased by reading in that readers might have a moral ownership of racism, leading to a willingness to act directly and with civil disobedience; the impact of protest could be increased in that the populace could be more willing to listen to others, see the world from a new perspective, and think rationally in response to widespread dissent. During the present pandemic, when direct, in-person advocacy might not be a feasible option for many, reading may be the only and most effective temporary solution to racism in America for the everyday non-policymaker.