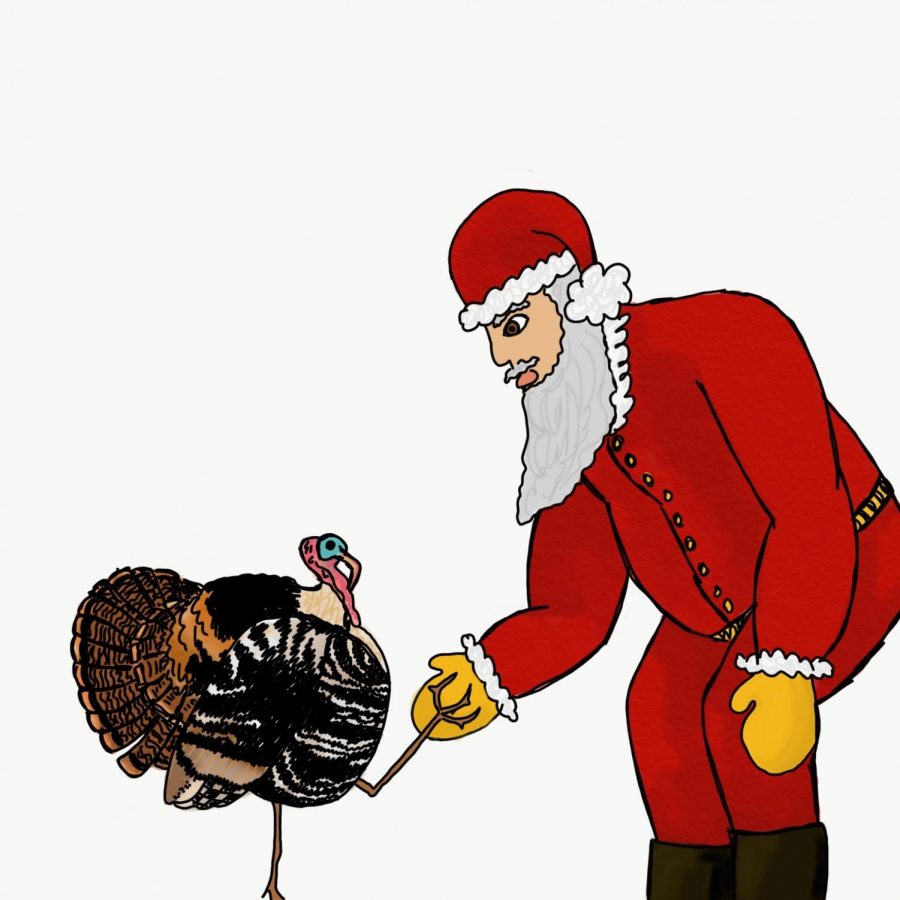 Earlier today, Thanksgiving held a press conference to announce his retirement from the month of November, thinking first of his family: “The move to May will be hard on the entire family. The kids have friends, you know?” It was at this part of the press conference that Thanksgiving teared up, thinking of traditions, continuing, “I just want to thank the Pilgrims, and the Native Americans. They obviously brought me here, so thank you to them.” Thanksgiving was obviously in a good place when making this decision, but it was still hard to hang up the coat. Thanksgiving wishes Christmas all the best in the upcoming holiday seasons, saying, “Christmas is a great guy, I wish him all the best.” Thanksgiving and Christmas have had their “beef” in the past, seeing as Thanksgiving has simply been an official starting point for Christmas for the past 50 years, but Thanksgiving seems to be ready to move past that.

When asked about the situation, Christmas said, “I mean, the guy has been a mentor to me. A lot of my inspiration is drawn from him.” Christmas has never really been able to get the turkey thing to stick, despite experimenting with ham and geese. “I respect the synonymity of turkey and Thanksgiving. I could never do that with a meat, I needed candy canes to cement a food as mine, turkeys… that’s impressive.” This of course ends the age-old debate as to when it is acceptable to celebrate Christmas, as Thanksgiving is no longer in the way of listening to “All I Want For Christmas Is You” anytime after Día de Los Muertos.

Thanksgiving believes this has been a long time coming, “Christmas has slowly been overtaking my week, first with Black Friday, then Cyber Monday. I hope Halloween can keep up!” Halloween and Día de los Muertos are sad Thanksgiving is moving to May. “We are obviously excited to compete for attention with Christmas, but he has the leg up on us,” said Halloween, “Halloween y yo sabemos compartir el amor,” (Halloween and I have learned to share the love) joked Día de Los Muertos. The two have become more friends than rivals despite their relative closeness to each other.

Easter now has to step up her game, said Christmas, “I came after Thanksgiving and stole his spotlight, but now Easter has Thanksgiving to worry about, and that’s some tough competition.” Easter had little to say on the topic. She tweeted out, “Best wishes to Thanksgiving, hope his family has an eggcellent move.” We reached out for another comment, but Easter’s agent declined.

Because of this, Christmas decorations have appeared extremely early this season. To be clear: Putting up Christmas decorations early will not end 2020 early. Christmas loves the support of fans and caused a bit of controversy earlier this year, caught on tape as saying, “I start in November, Thanksgiving is a three day holiday.” Said Thanksgiving, “Advent calendars start on December first for a reason.” However, with the new move, Advent calendars are now being manufactured to begin in early November. Said the guy in charge of Lego Minifigure Advent calendars, “We have had to make so many new minifigures. You would not believe.” Advent is a Christian tradition that celebrates the Christmas story over four weeks. Correction- was a Christian tradition over four weeks. Now six. Advent wreaths only had five candles, so churches are scrambling to add an extra without lighting things on fire unnecessarily.

Thanksgiving moving to May is yet another piece of news that makes 2020 so very 2020. Well-wishes were given to Thanksgiving and his family, and we extend ours. November has lost a legend, and May has gained one. Stay safe, everyone.