Yes (Meghan Mason): One TikTok, indivisible, with Charli D’Amelio for all

Two eyes and lips, superimposed onto a grocery store shelf of vegetables, mournfully look into the screen. “You love the idea of me, you love being seen with me, but you don’t love me,” the vegetables say. This absurd fifteen-second video is somehow a perfect illustration of TikTok, a platform that seems to have taken over the internet. The vegetables are mouthing a line from the popular TV show “Outer Banks,” and the TikTok’s creator, @the_queencity_realtor, is depicting the complicated and sometimes toxic relationship between humans and grocery-store vegetables. The creator’s emotional vulnerability truly connected with the viewers. Commenter @alikitkat2 saw herself in the video. “Y’all ever just buy veggies with whatever else you’re getting so the cashier doesn’t judge you?” she wrote. And user @dreaasteff commented, “Not me thinking I was the only one who would rudely let her veggies rot.”

One could easily see this TikTok as an example of privileged Americans making jokes about wasting food, while the world’s unsustainable farming practices wreak havoc on the environment, and many people still experience hunger. One could also see the teenagers in the comments as procrastinating students who should be finishing their homework. While there is truth to these perspectives, it is also true that Tiktok’s short videos — on subjects ranging from sad rotting cauliflowers, to the presidential election, and the plight of oppressed Uighurs in China — are able to connect millions of people from across regional, cultural and political divides with humor, idealism, and compassion.

Originally emerging as a successor to defunct platform Musical.ly, TikTok surged in popularity in the U.S. in 2019 and currently has over one billion users worldwide. While the platform’s creators and fans are primarily teenagers, it garnered national media attention among adults (boomers) in late June when large numbers of TikTok users and K-Pop fans successfully pranked President Trump by inflating the predicted attendance numbers for his Tulsa, Oklahoma rally. The successful prank was an incredible feat, especially given the fact that the organization and planning took place completely online. No matter one’s position on the political spectrum, it can be agreed that the episode was an incredible demonstration of the power TikTok can have in connecting teens and helping them find their political voice. It showed that teenagers too young to vote can still have a say in elections.

A social media platform as large and popular as TikTok does, of course, have its flaws. For example, users’ anonymity online allows some mean-spirited individuals to bully and harass without consequences. Furthermore, TikTok, like other social media platforms, has been justly criticized for creating echo chambers where people view only videos that are filtered by TikTok’s algorithm to reinforce their preexisting opinions. This phenomenon is manifested in the many self-contained Tiktok communities, more commonly known as the different “sides,” including but not limited to: “Straight Tiktok,” “Alt TikTok,” “Gay Tiktok,” “Conservative Tiktok,” and “Leftist Tiktok.”

However, when considering these issues it is important to remember that such problems did not stem from Tiktok itself. These are ubiquitous problems faced by humanity as a whole. To suggest that bullying is a “social media problem” is to be oblivious to all the in-person bullying, prejudice, and hate present in everyday life. And the human tendency to be friends with like-minded people or seek out places where they “fit in” is just as prevalent in “real life” as it is online. Social media only reflects human nature and practices; it does not create them out of nothing. And despite its flaws, TikTok overwhelmingly reflects the best of humanity. People can do a lot worse than dance, laugh, and comment on one another’s dancing and laughing. Because all people — young and old, gay and straight, blue-state and red-state — have a dejected and ignored vegetable in their fridge. As commenter @talktotcoop said, “I hear some baby carrots in my fridge, muttering curse words my way.” 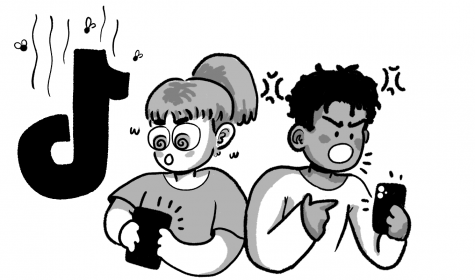 No (Michael Ball): The dangers of the Tiktok time machine

The world is currently facing a plague unlike any seen before, however, this isn’t COVID-19. The real scourge of humanity is TikTok. In 2014, an app called Musical.ly was released on the App Store. Almost a year later, during the summer of 2015, it became one of the App Store’s most downloaded apps. However, Musical.ly’s success was short-lived as people realized how embarrassing it was to lip-sync to popular songs for 15 seconds. However, in 2016, it was rebranded as TikTok and the platform expanded from just lip-syncing to perhaps even more cringe-worthy dances. It also encompassed a large variety of one-minute videos, from people talking about their lives to videos of dogs and cats making funny faces. It grew so much that now there are entire “sides” of Tiktok dedicated to one subject or another. Tiktok, unlike its former iteration, has survived and is currently number one on the Apple Store, and number two on Google Play. It appears that there is nothing not to like; it can be funny, serious, or just plain weird, all depending on the user. Even Tiktok’s biggest critics cannot deny that it can be very fun to be on for hours and hours on end. In that statement lies one of the troubles of TikTok: how extremely addictive it is. Unfortunately, addictiveness is not the only problem created by TikTok. With all of its intriguing videos, comes the platform it gives for cyberbullying and the belittlement of others.

In the age of online school, students have found it harder to stay focused while doing homework. One of the many, and perhaps the most pervasive distractions, is TikTok, which allows people to watch video after video without feeling like any time has gone by at all. According to company documents reported by the Wall Street Journal, TikTok users open the app at least eight times a day and use it longer than 45 minutes daily, which is equivalent to Instagram and longer usage than Snapchat and Facebook.

“I had TikTok for a while cause everyone had it,” CHS sophomore Sebastian Grannis said. “But I spent way too much time on and it took away from actually important things like school, so I mounted the strength and deleted it, and I think it was a really good decision because I have fewer distractions and can focus more on important things.”

TikTok is consuming massive amounts of people’s time that could be dedicated towards more important pursuits. But unfortunately, unlike Grannis, the majority of people do not have the resolve to simply delete the app because of how captivating it is. TikTok has accomplished this by limiting the amount of time on any one video and by using a system that will automatically play the next video when the last one is done. By limiting each video to less than a minute, TikTok makes it easy for a user to watch a lot of content without even noticing. Unlike television shows where one can see exactly how long the episodes are and how many have been watched, short videos on TikTok might not feel like a long amount of time but it actually is. Coupling this with playing videos right after another can cause people to watch large amounts of TikToks and waste long amounts of time without realizing it. This ties into the fact that using TikTok takes very minimal effort as people do not have to search for the next interesting video like they would have to on a platform like YouTube.
While TikTok wastes users’ time, another factor even more detrimental is that it creates a platform for cyberbullying and hate speech.

“I’ve seen the most toxic comments on TikTok,” CHS freshman Kennedy Zell said. “Whenever I see a video I look at the comments out of habit, and sometimes they [the comments] are really bad. Especially towards people who have a disability or don’t fit the world’s beauty standards. I don’t know what benefits people get from doing that or why but I think it’s very hurtful and unnecessary.”

Sadly, what Zell describes is the norm on TikTok, which is people belittling others just because they can. However, the comments are not the only way that people can attack others. TikTok is similar to other social platforms, as it relies on human moderators and reporting to flag and take down hurtful content, not to mention how biased the system is. This means that people can upload videos of themselves openly attacking and hurting others. These problems were exacerbated during the 2020 election, as people attacked and made fun of people who had different political views than them, and the comments on these videos just permitted more hate. These comments just contribute to the decrease of mental health among people, especially teenagers. TikTok creates an environment where people can attack others with no consequences and cause serious damages to others mental health, and it needs to be stopped.

TikTok seems like there is nothing not to love, but in actuality, there is more than enough. Tiktok has made it extremely challenging not to spend hours upon hours on the app by coupling short videos that are tailored to each person and videos that will play right after another. This social media platform more than any other has created a toxic environment and helped to normalize cyberbullying and belittlement of others. It has no real safeguards to fight this and because of its wide usage, is detrimental to people’s mental health. Put an end to TikTok.