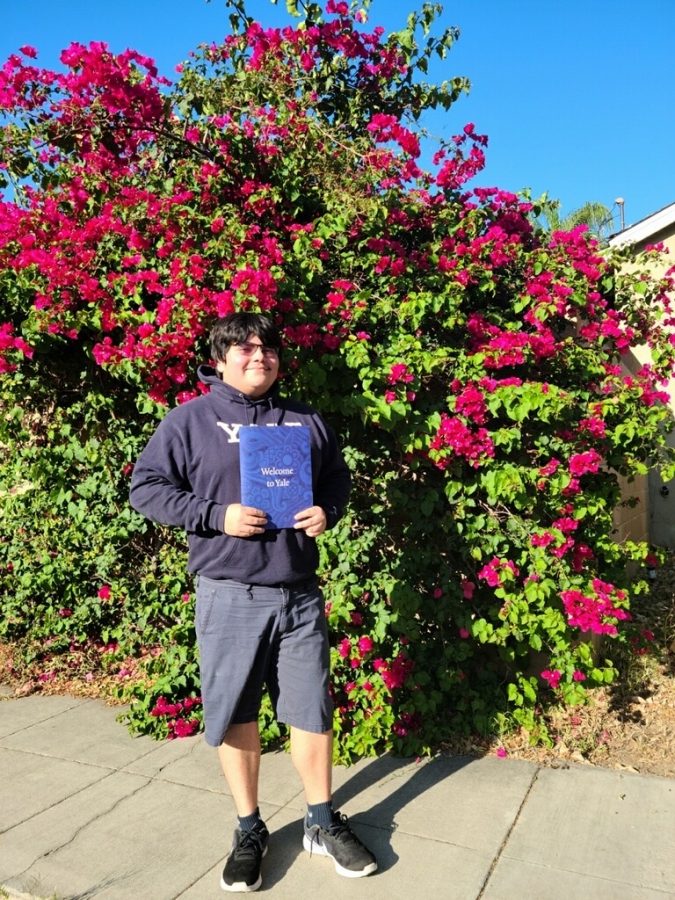 Some people choose their dream school based upon academics, some choose based upon prestige, some upon location, and well — some choose their dream school based off of Gilmore Girl, Rory Gilmore. Meet Alex Abarca: “Gilmore Girls” fan, CHS senior, first-generation college student, captain of the CHS Speech and Debate Team, and all-around wonderful person. Abarca, just like Rory Gilmore, will be attending Yale in the upcoming fall semester with an intent to double major in Political Science and Mathematics.

Yale has been Abarca’s dream school for years on end. Several reasons drew Abarca to Yale, ranging from the academic structure, to the community, to the small class size, and even to his favorite sitcom character.

“I watched Gilmore Girls a lot growing up,” Abarca said. “Rory Gilmore icon — love her — went to Yale, so I guess that’s what first got me interested. But I did grow to enjoy Yale a lot more over the years because many Ivy Leagues are known to be very cut-throat, but Yale stands more for succeeding together in an environment where nobody tears each other down. I don’t like being in that competitive ‘I’ll knock you down just so I can have a higher GPA’ type of environment.”

Beyond that, Abarca gravitated heavily towards Yale’s small class sizes, as he prefers a smaller setting that feels comfortable enough to be quite talkative, rather than reserved. In addition, the residential colleges at Yale are very tightly knit, fostering close, meaningful relationships, and a strong sense of supportive community. Similar to many of the Claremont Colleges, Yale feels more like a small, liberal arts college, rather than a huge dog-eat-dog university. However, along with the small classes and liberal arts feel, the research and educational opportunities at Yale are unlike any other, which was another key factor in Abarca’s choice.

Starting his applications in September of 2019, Abarca applied early action to Yale, and found out very early (Dec. 2nd, compared to the normal date for Yale’s early action, Dec. 15-20) that he had gotten into Yale. From there, the decision not to add any further stress of college applications onto his plate was a relatively easy one for him, as he knew it could not get any better than Yale. But this was not Abarca’s first concern when he heard the news. Rather, his first (and most important) concern was how to tell his mom.

“When I found out I got into Yale, the first thing I thought was ‘how am I going to prank my mom?’” Abarca said. “So right before psych that day [seventh period,] I called my mom and told her there’s an emergency and she just needs to come to the school and get me immediately, so of course she panicked and came. Mrs. Sieg let me write on a blank piece of paper ‘I got into Yale,’ so I crumpled it up and once I got in the car with my mom, who was freaking out, I threw it at her. She opened the paper and lost it completely. It was an insane experience.”

What makes Abarca especially unique, however, is that he is a first-generation college student. Abarca looks towards Yale with a very humble attitude, grateful for the opportunity to receive higher education, especially at his dream school.

“Nobody in my family has gone to college before,” Abarca said. “Higher education has never been a thing in my family because it’s just not an opportunity any of my family members or relatives have gotten in the past. To put it into perspective, my mom started working when she was 10 years old, so my parents really cared more about me going to college than what college it was.”

Looking backward, Abarca fondly reflects on his years at CHS saying that he will truly miss all of his friends who kept him sane in the craziest of times. Along with his beloved friends, he will miss the CHS Speech and Debate Team for everything that it has given to him, but most of all, he will miss all of the relationships and bonds he formed through Speech and Debate.

“Abarca is one of the most hard-working people I’ve ever met,” Melissa Glover, fellow CHS senior and Abarca’s good friend said. “He has grown so much since his freshman year after hundreds of hours of hard work and thousands of cups of coffee. He was bound to do something great and it looks like he found his new home at a place that’s right for him!”

Looking forward, Abarca awaits his next four years at Yale and plans on going to Law School to become a Lawyer after his time at Yale comes to a close. He hopes to ignite the passionate flame underneath him by practicing law, as well as enjoying his experiences and education at Yale in the upcoming years, as his friends and family cheer him on in all of his successes and accomplishments to come.