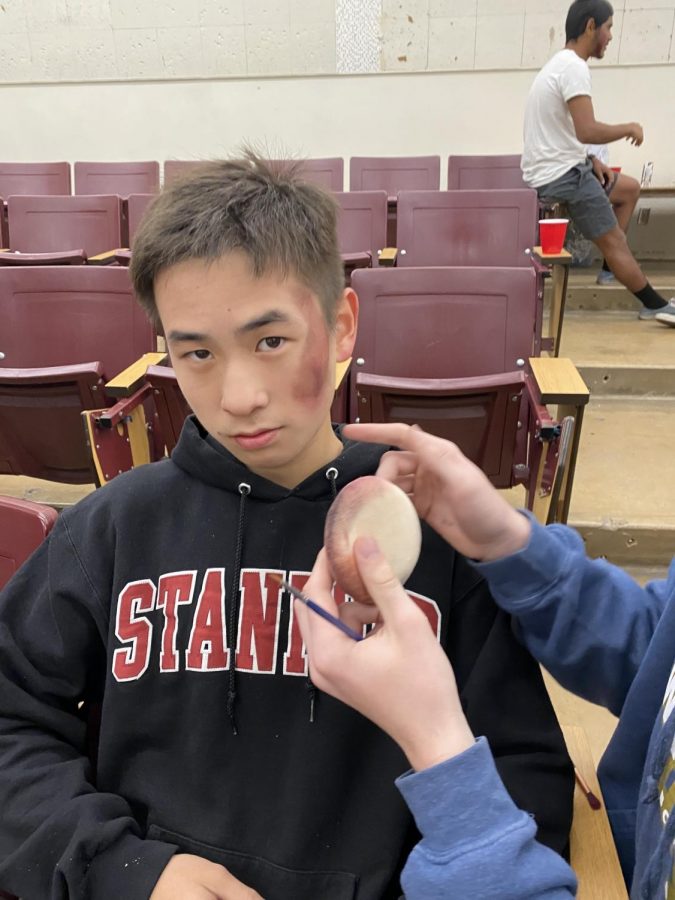 Writer Charles Jiang in the process of becoming a member of the "living dead" in CHS' Every Fifteen Minute program.

As a participant in the 2020 Every Fifteen Minutes Program, I was a part of an experience that gave a group of students the opportunity to teach the rest of the student body at CHS the painful effects of drunk driving. This experience started in the fall of 2019, where I was given a call slip for a “survey.” However, this “survey” turned out to be the information meeting for the counselor-selected group of students that would participate in the Every Fifteen Minutes Program. During the period between this meeting and March 4th, the date that CHS’ Every Fifteen Minutes was to take place, students in the program had to write their own obituaries and attend meetings in Counselor Jeremy Troesh’s office, where they would receive more information each meeting. The nature behind the Every Fifteen Minutes Program is to be a secret, so that the event takes students by complete surprise. This secretive nature is one of the key components in impacting the student body.

On March 4th, I came to school at 6:30 a.m. in order to check in with the administrators of the program and to put my overnight bag in room 105. Then I went to my first and second-period classes as any other student would on a typical Thursday. However, within the first 10 minutes of second-period, my counselor Nicki Mitchell came with a grim reaper to read my obituary in front of my classmates and took me away to room 104 where I would get ready to become “dead.” After my face was covered in makeup that resembled blood and scars from a car accident, I went to my third-period class.

For me, one of the hardest parts was going to class and not being able to speak. I sat in my third-period class with a strong urge to talk to my classmates, but could not. Then after my third-period class, I went to room 104 and prepared for one of the most impactful moments of the program, the crash scene. As a “living-dead” person, I sat on the sidelines watching police cars and firefighters come onto the scene and pull the bodies of the students who had “died” from the accident. After the scene concluded, the participants of the Every Fifteen Minutes program took a trip to the hospital where they learned daunting statistics of drunk-driving traumas and saw a real dead body. After the trip to the hospital, we were taken to our hotel where we participated in a series of team bonding activities to get to know each other. Then, came the most impactful part of the night. We listened to an emotional presentation by a woman who had lost her brother due to drunk driving, and then we listened to a police officer talk about some of the most heartbreaking cases of tragedies caused by drunk driving. We then ended the night writing a letter to our parents, as if we had died. The entire room was silent as everyone was going through the emotional process of addressing their parents as if they would never see them again. This was undoubtedly one of the hardest and most impactful processes of the program.
On March 5th, we came back to CHS and rehearsed for the funeral event that would take place during fourth period. During the rehearsal, we watched the Every Fifteen Minutes video that the CHS Advanced Video Production class had put together, and then went over what was going to happen during the funeral event. The funeral was easily the most emotional part. As we sat there watching a video that captured the painful mock crash scene, and listened to three students pour their hearts out and tear up on stage, there was not a dry eye in the room. Then, a guest speaker who had gone through the devastating process of losing his entire family due to a drunk driving incident gave us his story, which touched the hearts of almost everyone sitting in the room. The event then ended with students leaving emotional but also with a good sense of fear.

When it comes to drunk driving, it most definitely takes more than statistics to show its true impacts. CHS’s Every Fifteen Minutes program captivated its audience by showing the painful reality of losing a loved one, and every lasting impact that it has and will have.