CHS athletes all have guts, but only select sports get glory 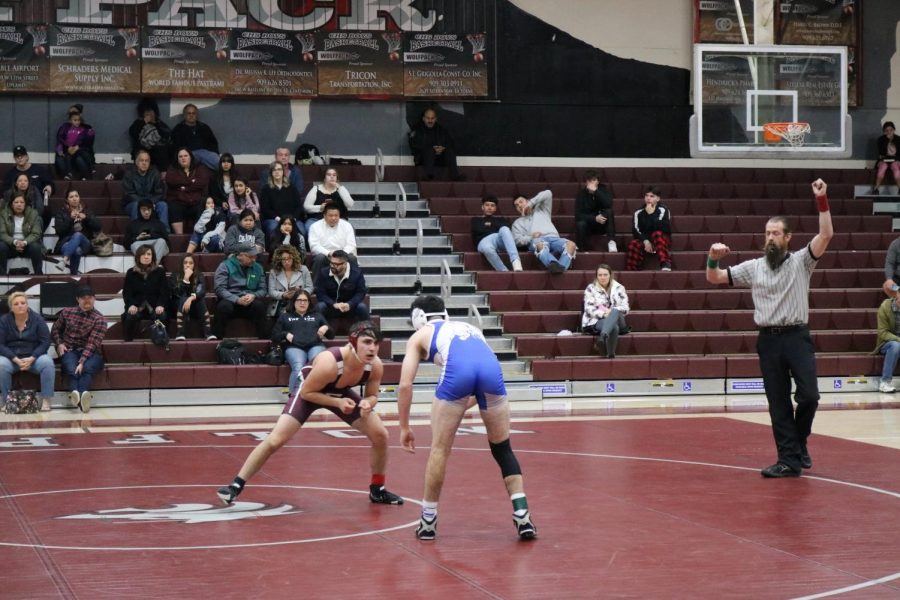 Athletes wrestle in the CHS gym. In stark contrast with the fall football games attended by hundreds of community members, the stands are largely empty. Had more people shown their support, the atmosphere in the gym could have had a positive effect on athletes’ performance.

Today’s youth have options to participate in a variety of different sports from a young age, and while their interests and a wide array of sports are still present in high school, it is obvious that the popularity of individual sports among the student populace at CHS is uneven. Sports such as football and soccer dominate over other sports on campus and receive the most student recognition and support. While it is natural for students to support their personal and popular interests, the efforts of athletes in other sports often do not receive enough recognition.

Student support is important to athletes, as having additional support at a home competition boosts confidence and self esteem. Sophomore John Anding is on the boys volleyball team and emphasized the importance of having support.

“Boys volleyball is often underappreciated in comparison to girls volleyball,” Anding said. “We would appreciate having support just as they do.”

Sports such as tennis, golf, wrestling, and cross-country are often considered an “acquired taste,” as only those who actually enjoy playing the sport are expected to enjoy supporting it. Football and baseball, on the other hand, are considered acceptable to watch even if supporters do not personally partake in it because of its long history in America. These sports are more ingrained into American culture than others. With all the excitement directed at these sports, however, other athletes that work just as hard in their sport do not always get the credit they deserve.

Not every fan may understand the rules of the game, but many tend to be attracted to the pace and action of a sport. Most people would likely enjoy a basketball game with constant action than an intense and focused golf match. However, if time is taken to fully understand these more complex sports, they can be further appreciated.

Gender has a huge role as far as popularity and attendance goes at games. There are various reasons as to why one would prefer a men’s game over a women’s. This mindset is primarily influenced by the differences in performance and strength between male and female athletes. While boys’ basketball may receive more support than girls’ because boys tend to be taller and stronger, girls’ volleyball would receive a larger fan base due to the belief that it is a more feminine sport and that they have different playing styles. Although every team has its different strengths it does not make the game any less interesting. The efforts of both genders can be further recognized with additional support at under-recognized sports’ games.

Arayyah Smith is on the CHS Junior Varsity Girls Basketball team. She expressed her perspective of boys’ basketball gaining more home support than the girls’ team.

“Even if girls aren’t dunking that doesn’t make the game less exciting,” Smith said. “Just because the boys may have a faster paced game, we still prove our strengths as athletes through our agility, speed, and endurance and we deserve recognition for the work we put in.”

Smith also offered a solution to direct attention towards underrated sports as she recognized how certain sports are more advertised on campus through posters and announcements.

“I feel that the wins and losses should be publicized more to bring in more audiences to our games,” Smith said. “Distributing equal announcements and updates about every sport can bring more attention to all different sports.”

Despite the differences in audiences and support, it is important to acknowledge the efforts of all athletes. With more sports news on campus, underappreciated sports can gain more encouragement from their home crowds. Also, having an open mind about attending and supporting different sports can develop into a new interest, and watching different sports can be a thrilling new experience if time is taken to appreciate them. While attending a football or basketball game is known to be more traditional, taking consideration to support other sports on campus will create a better environment for CHS student-athletes to thrive in.