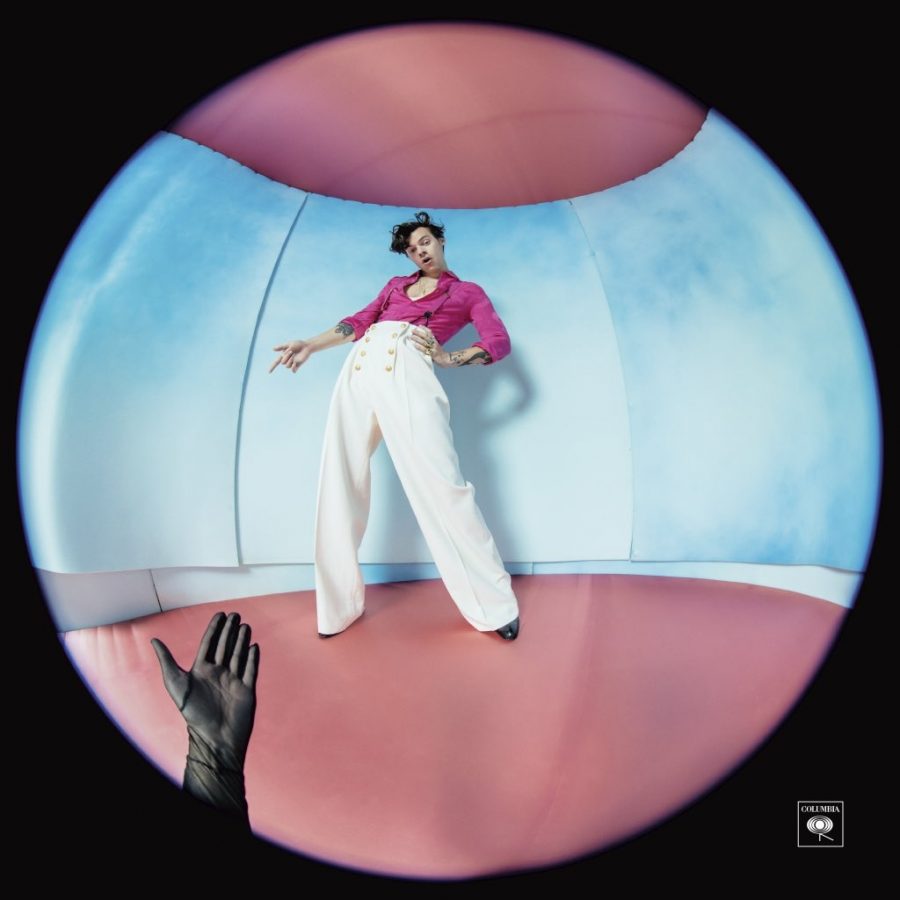 I’d walk through fire for you, just let me adore you, like it’s the only thing I’ll ever do…” heartthrob Harry Styles sings on his popular song “Adore You.” This song is one of many on Styles’ sophomore album, “Fine Line,” which debuted on Dec. 13, 2019. The album spurred joy within the fandom, as many fans thought this event would never come.

After Styles ended his first tour as a solo artist for his first album, self-titled “Harry Styles,” he announced on Instagram that he would be taking a break from touring and releasing new music.
Since then, Styles has been known for being extremely inactive on social media, and fans wondered if the famous singer would ever come back at all. In Oct. 2019, however, Styles then suddenly appeared on Twitter, teasing fans with tweets like, “Do,” and “Kiwi walked so Watermelon Sugar could run.” Soon after, he released the single, “Lights Up,” which caused hope in fans that he had finally returned to the music scene. Indeed, he had. Styles announced that his sophomore album, Fine Line, would be debuting on Dec. 13, and went on to release two more singles titled “Watermelon Sugar” and “Adore You.”

The “Fine Line” album consists of 12 tracks, each having a different tempo and meaning from the other.

“Golden,” the first song on Styles’ album, sets the tone for the whole album: moving on from heartbreak and toxic relationships. The song reveals the happy emotions during a new relationship, but also the fears of being heartbroken and hurt again one might experience. The song is very upbeat, and when listening, one might hear the deeper side of the song with lyrics like, “I’m out of my head and I know that you’re scared because hearts get broken,” and, “I can feel you take control of who I am and all I’ve ever known.”

The next track, “Watermelon Sugar,” is one of the most questioned songs on the album. The song, another upbeat tune, had been rumored to be about Styles’ ex-girlfriend, Camille Rowe. When searching the phrase “watermelon sugar,” the novel, “Watermelon Sugar,” one of Rowe’s favorite books, comes up, which has been mentioned in many interviews before. However, Styles did not comment on this theory and instead said that the song is open to interpretation.

“Adore You,” the third song, is a more straightforward song, with Styles singing about a person who seems to be shutting him out of their life. He sings about doing anything for this person, even walking through fire, just to let him adore them. The song also came with a music video, which is based around a fictional country named Eroda, where everyone seems to be sad and depressed, except for one boy (Styles). Throughout his life, the boy also becomes very depressed and seems to be frustrated with not being able to be happy, so he goes down to the ocean, where he finds a fish out of water. The fish does not seem to want to go back in the water, however, Styles keeps it as a pet. In the end, he lets the fish migrate with its species, and it brings the town of Eroda together to smile again. This can be seen as Styles being at a very low point in his life, and the fish being a metaphor for his fans saving his life.

“Lights Up,” another controversial song, was the first released, as mentioned before, and can be seen as what brought fans together again. The song, however, has no label. Some theories say that the song is addressing Styles’ sexuality, with him constantly asking, “Do you know who you are?,” as well as the song coming out on National Coming Out Day. However, though Styles has neglected to call himself heterosexual, he has said in interviews that he does not label himself or his sexuality.

“Cherry,” the fifth song on the album, is the first slow song of “Fine Line.” It has been proved that the song is about Camille Rowe, Styles’ ex-girlfriend, as at the beginning and the end of the song, there is a section of dialogue in French spoken by Rowe.

“That’s just a voice note of my ex-girlfriend talking. I was playing guitar and she took a phone call—and she was actually speaking in the key of the song,” Styles said when explaining the dialogue in a Zane Lowe interview.

In the beginning, Rowe says, “Coucou,” which has multiple meanings, but translates to, “Hello,” “Peek-a-boo,” or “Cuckoo.” At the end of the song, there is a piece of dialogue that can be translated to “Hey are you asleep? Oh, I’m sorry… Well, no… Nope, it’s not important… Yup, we went to the beach, and now we… Perfect! Let’s go!” However, though Styles does agree it is Rowe speaking, he does not speak further into what this conversation means or is about.

The next song, “Falling,” is by far one of the deepest and heartfelt songs on the album. However, instead of the song being about heartbreak over a girl, it is focused more on himself and changing into a person for the worse.

“I had started to feel myself becoming someone I didn’t want to be, and that was really hard,” Styles said in a Zane Lowe interview.

“Falling” allows the listener to fall with him from the highs in earlier tracks. In the song, one can hear the agony in Styles’ voice, as he sings lyrics like, “What am I now? What if I’m someone I don’t want around?” and “Forget what I said, it’s not what I meant, and I can’t take it back, I can’t unpack the baggage you left.” Though Styles has mentioned that the song is mostly about himself, other theories have been revealed, as Styles’ producer, Kid Harpoon, has said that the break-up [between Styles and Rowe] took a toll on Harry, which is a reason why so many lyrics are about her on the album.

“To Be So Lonely,” one of Styles’ most emotional songs on the album, is about the denial stage of grief. When listening, one can theorize that there is indeed a cycle of grief on the album. It starts with “Cherry,” interpreted as anger, and “Falling,” interpreted as depression. “To Be So Lonely” can be seen as more of a carefree song, as Styles is now in denial and more in a lonely state of mind. As Styles sings, “And I’m just an arrogant son of a b-, who can’t admit when he’s sorry,” he references the 2004 film, “The Notebook,” as a metaphor of two young people falling in love, then struggling to move on after a breakup. This can also be seen as a hint towards his ex-girlfriend, Rowe. Styles also sings frequently throughout the song “Don’t call me baby again, you got your reasons. I know that you’re tryna be friends, I know you mean it. Don’t call me baby again, it’s hard for me to go home,” meaning that Styles is trying to move on from his ex-girlfriend and that if she starts calling him “baby” or wanting to date again, it will be “hard for him to go home,” and will be harder for him to move on.

“She,” the eighth song on the album, Styles confesses that he has an ideal type of lover. But throughout the song, he realizes he cannot recognize who would fit the mold. Styles first starts singing about dropping his future children off at school and going to work, all while still thinking about his lover. This, however, seems to be a daydream of what Styles might want in the future with his significant other. He sings, “She (she), she lives in daydreams with me. She’s the first one I see, and I don’t know why, I don’t know who she is….” The basis of the six-minute song is that Styles keeps having daydreams about a lover; however, this lover does not seem to be a particular person or face.

“Sunflower. Vol. 6,” the ninth song on the album, can be theorized as the final stage in Styles’ journey: acceptance. In “Sunflower,” Styles seems to be reflecting on the good memories of his relationship, possibly with Rowe. The sunflower can be seen as a metaphor for the good times of the past. Styles also notes that the reality of these memories, also known as the symbolic sunflowers, do die in the physical sense; however, this track’s melody represents the new seeds planted in order to keep the memory alive and sweet.

“Canyon Moon,” the other final stage of Styles’ journey, is a bittersweet track, as Styles recalls a happy moment from his past and yearns to come home. “Canyon Moon” seems to be a continuation of the previous song, “She,” when Styles sings the verse, “Nine in the morning, the man drops his kids off at school, and he’s thinking of you, like all of us do,” and continues to sing [in “Canyon Moon”] “I heard Jenny saying, ‘Go get the kids from school.’” Styles also sings about wanting to go home in “To Be So Lonely” about it being hard to go home, and yet another connection made in this song is Styles singing happily, “I’m going, oh, I’m going home.”

“Treat People With Kindness,” Styles’ 11th song, is one of the most sincere songs on the album. “Treat people with kindness” is a slogan Styles has been using since the beginning of his solo career, and has been used in merchandise since.

“The slogan on his merchandise has been widely adopted by fans as a symbol for love, kindness, and acceptance,” Styles said in a Capital FM article.

“Fine Line,” the final and 12th song of the album, touched on the need for balance of the highs and lows of love, as well as life in general. He first sings about someone having his devotion, yet also hating them. In the end, everything turns out alright.

All in all, Styles has produced a very successful and well-rounded album. Through the five stages of grief, Styles exposes the innermost workings and desires of his heart, all the while remembering the past and looking towards the future.